Christians have an inner person and an outer person. In other words we are part material and part immaterial. Obviously they work together in unison as body, soul and spirit. One correlation is obvious and that is the mind and brain connection. The brain is part of your physical body, but your mind is part of your soul. When Christians die they become absent from the body and present with the Lord. The brain will return to dust, but the soul with be with God.

The correlation of the outer and inner self 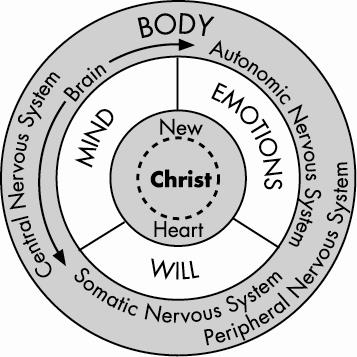 To illustrate the brain and mind combination, think of any computer operation. It requires both the hardware and the software. The brain is like the hardware and the mind is like the software. We can certainly have “hardware” problems such as organic brain syndrome, neurotransmitter problems, Alzheimer’s disease, etc. However, the emphasis in Scripture is predominantly focused on the software, i.e. the mind. The focus of medicine in the States, however, is on the hardware for illnesses like depression and anxiety. I will have more to say later about the proper use of medication. For now I’ll just say that taking a pill to cure your body is commendable, but taking a pill to cure your soul is deplorable.

One of the biggest issues in medicine is psychosomatic illnesses. Over fifty percent of all illnesses are psychosomatic, and that is a conservative estimate. In other words people can become physically sick due to anxiety disorders, stress, anger, depression, etc. Medical professionals don’t question that hypothesis. It is common knowledge. The number one spokesperson on psychosomatic illnesses in the States is Deepak Chopra, who is Hindu. The medicine he espouses is Ayurveda, which is an ancient form of medical practice in India. His infomercials have been seen by millions. I believe the Church should be the primary contributor to psychosomatic conflict resolution, not some false and confusing religion like Hinduism.